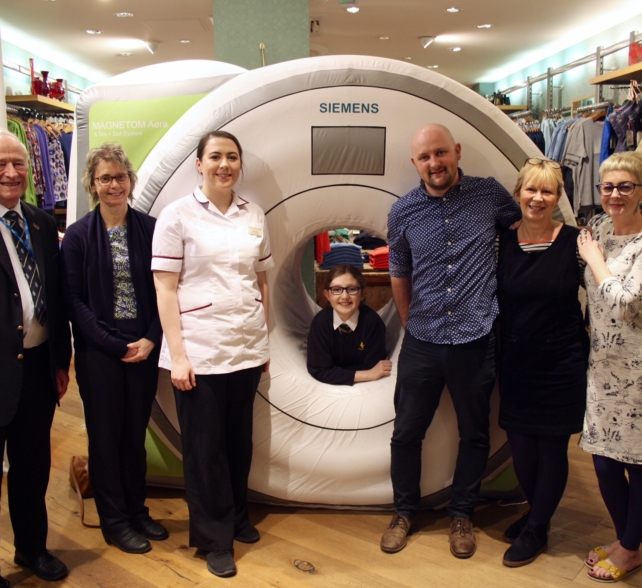 An inflatable MRI scanner that simulates the real experience for children and young people is now in place at Harrogate District Hospital thanks to the generosity of staff at Harrogate’s White Stuff shop.

Staff in the fashion and lifestyle store on Princes Street in the town raised a total of £3,050 for the simulator.

The simulator allows children to familiarise themselves with the equipment before having a real scan. Noise, vibration and claustrophobia from MRI machines can lead to children and young people becoming upset and/or scared, and the simulator is designed to help them get used to the experience before going through it for real.

The inflatable scanner received its official launch in the White Stuff store on Thursday 7 March, where Radiology staff, donors and charity colleagues came together to mark its arrival. It’s now been brought to the hospital where it is available for children and young people to use as part of their treatment.

It is hoped the inflatable, which was funded with support from the Friends of Harrogate Hospital and Community Charity, will help to reduce the number of young patients who require general anaesthetic for their scan, which brings with it extra risks and longer waits. It will also save families having to go to Leeds or to use another, perhaps sub-optimal, means of diagnosis.

Emma Burke, Specialist Radiographer at Harrogate District Hospital, said: “The brand new inflatable replica MRI scanner is a fantastic addition to Harrogate’s imaging service. For our paediatric service users, undergoing an MRI scan can be a daunting experience. However, with the input of our excellent play specialists and this new ‘simulator’ such patients can prepare in a fun environment while all aspects remain realistic. By doing this we aim to reduce cancellations and, more importantly, reduce the number of times where sedation is required.”

White Stuff has supported the Friends of Harrogate Hospital Charity for over 12 years and have consequentially been able to fund equipment requested from the Friends by hospital staff. In April 2014, the staff in the store raised £1,100 for a special Nonin cable that allowed the MRI scanner to scan children for the first time; it allowed the essential remote monitoring of blood oxygen levels.

The Friends of Harrogate Hospital and Community Charity are a fundraising group who are part of Harrogate Hospital & Community Charity. Friends Chairman Andy Wilkinson said: “We are very grateful to the team at White Stuff Harrogate for their enthusiastic support. On behalf of parents across the district, I thank White Stuff for all the childcare improvements they have enabled in our hospital. Finally, I stress it is not a bouncy castle so not available for parties!”